On the morning of November 28, “Read on the Lake” meets again in Xuanwu Lake Park for a special session – an International Reading Communication Meeting. As usual, the event is jointly sponsored by Jiangsu Reading Promotion Association, Jiangsu Broadcasting Corporation and Nanjing Literature Center.

Theme of the event being “Let’s read together in China”, reflecting the fact that participants are mostly foreigners that are living in Nanjing at the moment. This activity also obtains great support from Nanjing Association for Culture Communication, Jiangsu TV international channels, College of International Students of Southeast University, School of International Education of Nanjing University of the Arts, Purple Grass International Volunteer Service Group.

Nanjing is the first UNESCO City of Literature in China. This meeting attracts international participants from fifteen countries. They now study, work and live in Nanjing. They shared their love of reading. Mr. LIU Feng, a famous translator and also the deputy secretary-general of Jiangsu Reading Promotion Association, made reviews on the Chinese and international literature works cited on the scene. Ivana, who comes from Serbia and loves Chinese culture, finished her study in Chinese literature in Serbia and later accomplished her master and doctor study in Nanjing University. She has settled down in China and brings her daughter Mina at the scene. As a Chinese hand who has been living in China for ten years, Ivana is extremely familiar with Chinese workers and their books. She gives her private book list for foreign friends who want to learn about China and Chinese culture: “Especially, I recommend four books for you, Tea House by Lao She, Diary of a Madman by Lu Xun, The Ordinary World by Lu Yao, Blind Massage by Feiyu Bi.” Mina brings the famous Serbian poem My Future by Desanka Maksimovic for audience of the scene. 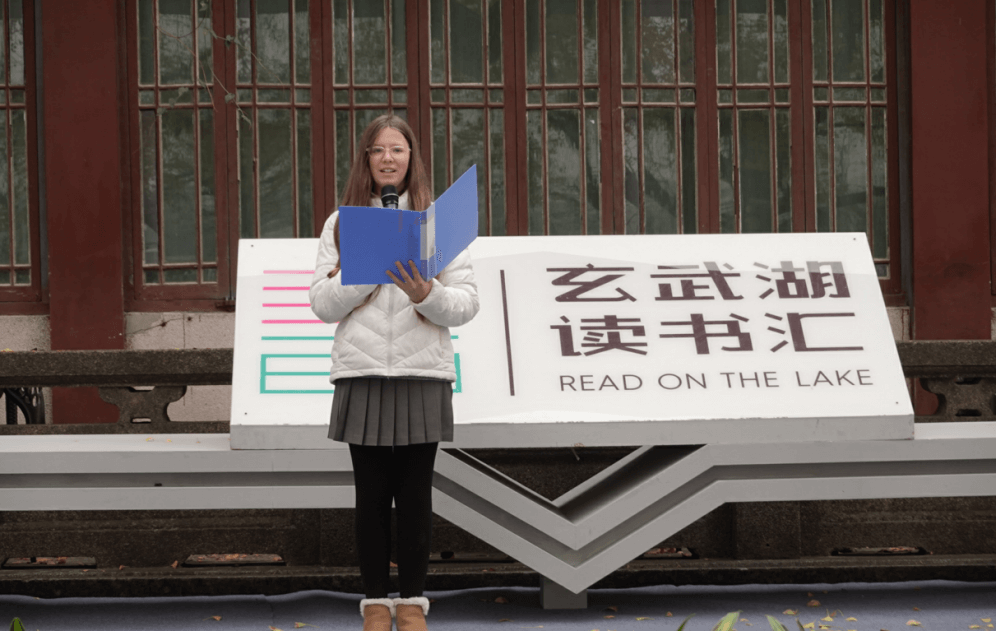 Tower is a symbol of Chinese classical architecture, as well as a sign of Chinese traditional culture. Foreign friends from School of International Education of Nanjing University of the Arts give performances of reading poems written by authors from different countries in different periods, which depicted the well-known glazed pagoda of Porcelain Tower of Nanjing in Chinese and English: Nankin The Porcelain Tower and On Top of the Porcelain Tower of Nanjing. Poems meet by the shores of Xuanwu Lake, they bring the audience to surpass the limits of time and space and appreciate the fusion of Chinese and western cultures. 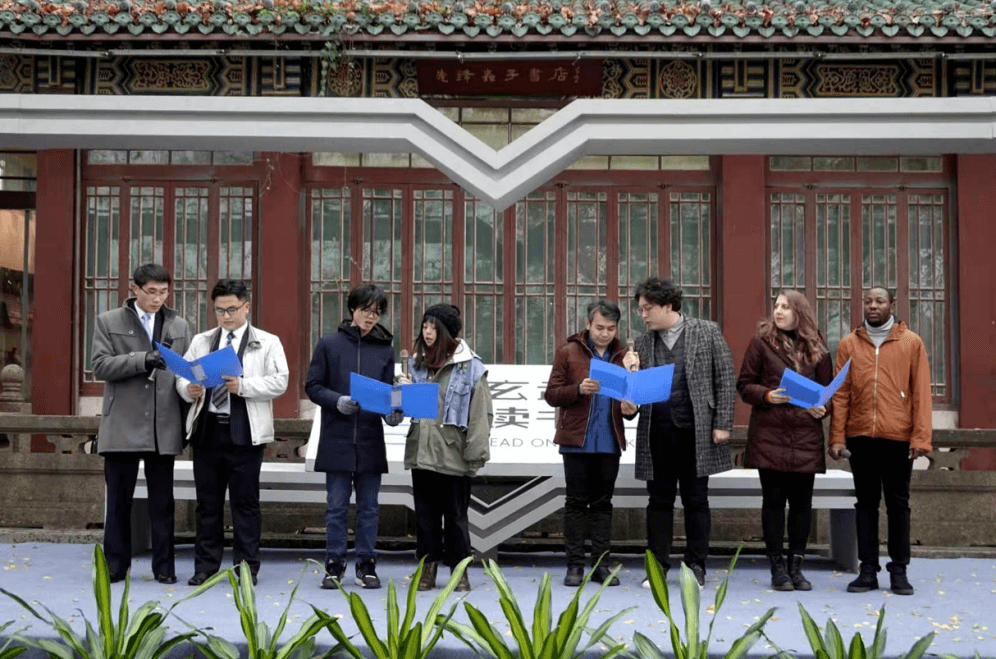 Reviews by Feng Liu: “The glazed pagoda has an extreme influence in the global community, the tower can compare to not only the natural scenery in Europe, but also the human landscape.” Liu added that, the glazed pagoda impacts plenty of imperial architecture such as the glazed tile roof of the Palace of Versailles was inspired by it, more directly, the UK’s World Cultural Heritage Kew Gardens, the Kew Gardens pagoda was established based on the glazed pagoda of Porcelain Tower of Nanjing. Thoughts in the Tranquil Night by Li Bai is widely known. Audience of this activity hear an international version of the poem. Jia Wei, who is from Russia, and Shui Le, who is from Bulgaria, read the poems of their own nations which have the same meaningful image as the first two sentences of Thoughts in the Tranquil Night. Jia Wei, who has half blood of English, reads the classical work of Zhimo Xu: Saying Good-bye to Cambridge Again. About this poem, Feng Liu remarks: “This is an admirable poem.” He introduces that the poem was written 92 years before, when modern Chinese was just put to use. People didn’t use it pervasively like today. But this poem is very beautiful. Liu adds: “Because of Zhimo Xu and this poem, Cambridge has become a symbol of Sino-UK cultural interactions.” Little friends Mooncake and Orio who come from Nigeria perform a child version of Mountain Trip by Du Mu. They also share with the audience the picture books of Journey to the West, as well as the Monkey King in their eyes.

Moreover, classical renowned works like The Mid-Autumn Festival Tune: When Shall We Have a Bright Moon, In Nanjing are read out by Gao Ya who is from International Education of Chinese Language major in Southeast University and representatives from Purple Grass International Volunteer Service Group, sparking out different cultural understandings. We can feel the loving emotions of foreign friends to Chinese culture and Nanjing, the City of Literature. 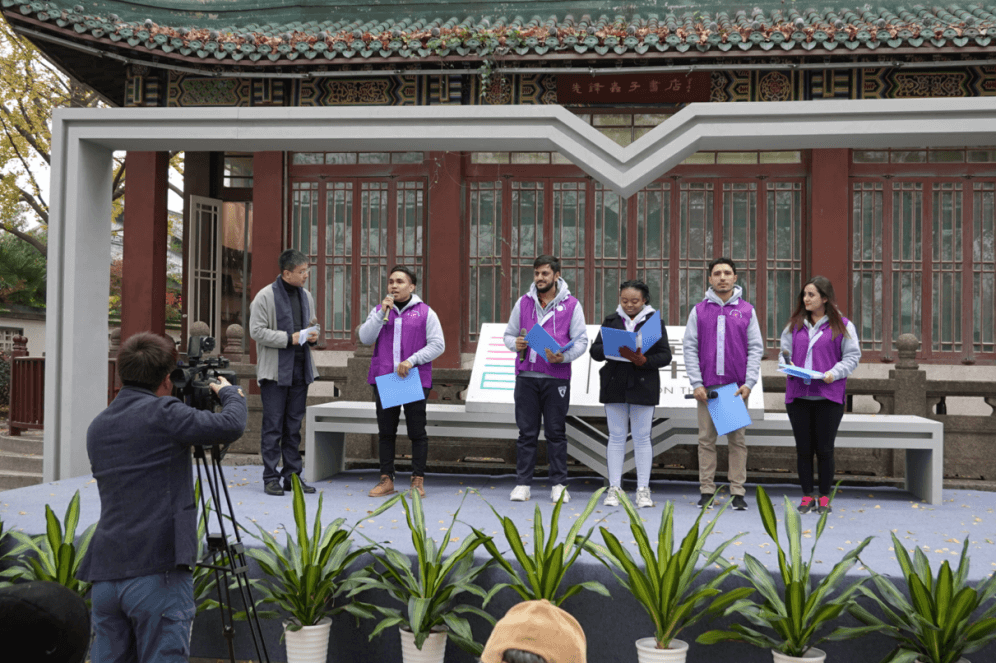 Chinese culture has a long history and friends across the globe. The activity presents the audience a feast of international reading communication, as well as a multielement perspective for literary reading and sharing. “Appreciate the beauty of oneself, enjoy the beauty of others, and admire beautiful things together.” Xuanwu Lake Reading Club hopes that the “art of literature” can act as a bond, the “civilian reading” as the intermediary, thus cultural communications between China and the rest of the world can learn from each other’s advantages and generate more understandings.