On Tuesday, July 5th, Nanjing Literature Centre organised an afternoon tea event featuring guests of prominent figures of the publishing and literary enterprises that are based in Nanjing. This event is in part to celebrate the 12th Jiangsu Book Fair Nanjing Venue, as well as the Nanjing City of Literature Book Festival dedicated to the cultural richness of the city. The event took place at the Phoenix Cloud Bookstore, which was designated the first Nanjing City Literature Hall that aims to provide quality literary service and activities for the public. 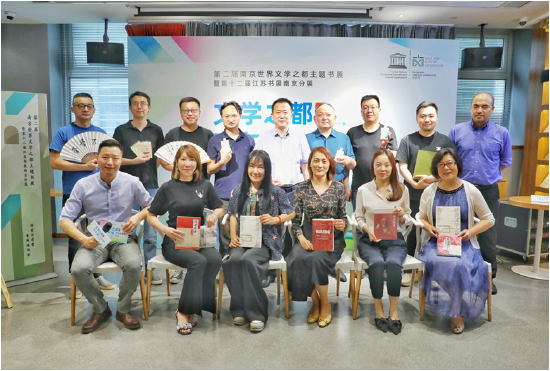 YUAN Shuang, the focal point of UNESCO Nanjing City of Literature, representing the event organisers, introduced the program. This series of events is open to partners, literature lovers, readers who love and care about literature and Nanjing. Throughout the year, “the afternoon tea” series aims to bring unique experiences to engage and inspire citizens, to establish new friendships, encourage sharing of experiences all the while being connected through the means of literature. The special session today will gather people in the book business, and provide an opportunity for people to share their stories. The first guest –WANG Xing, Deputy General Manager of Jiangsu Phoenix Cloud Bookstore Group mentioned that bringing a miniature of the Book Distribution Building (Xinjiekou Xinhua Bookstore) completed in 1983, marked an important instant in his life. Seeing as the building soon became a popular place for visits and impacted the national book distribution, Mr. Wang decided to start a career in book publishing. 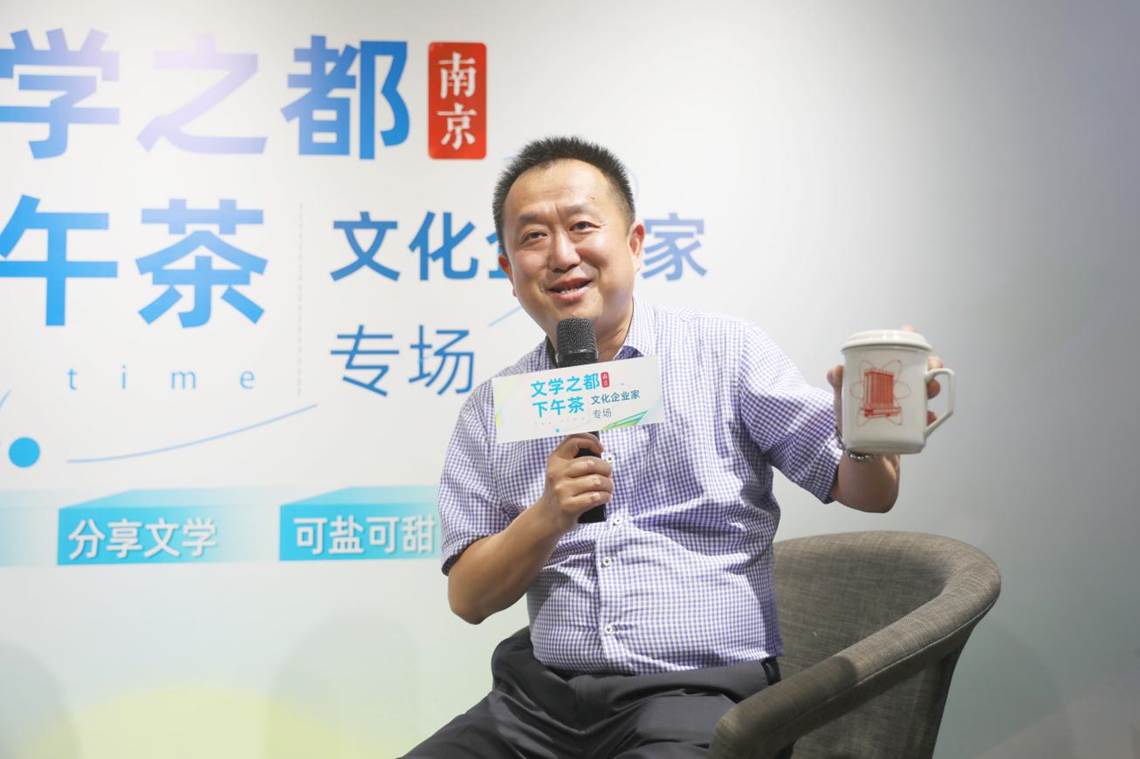 Similarly, YANG Runkang, the General Manager of Singularity Books, mentions the Book Distribution Building in his own speech, referring to himself as one of the middle-school students standing in front of the building’s entrance. Mr. Yang wishes to reflect the city of literature in both well-known figures and the general public by organising open art exhibitions including both experienced and new artists. ZHANG Chi, the Manager of the 24-hour bookstore in Yunshufang made a speech about integrating art in order to innovate bookstores. He also mentioned the importance of expanding horizons in children’s education by introducing a play “Young Jane Eyre” written by Marisha Chamberlain, following the plot of the world-renown novel “Jane Eyre” by Charlotte Brönte. The General Manager of Keyi Bookstore, QIAN Xiaozheng presented the audience with a Nanjing Classic – the literary series “A Dream of Red Mansions” by CAO Xueqin who spent his whole life completing this piece. By producing masks and tissues with the designs of SUN Wen, the Qing Dynasty painter who illustrated the literary classic in 200 painted pieces, Mr. Qian is striving to promote Chinese culture. CHENG Susu, the General Manager of Jinchuang Bookstore, brought wine developed by the company. The beverage is designed by young students and aims to pay attention to local culture in order to attract local audiences to the product, as well as the bookstore. The Deputy Editor-in-chief of Jiangsu Phoenix Art Publishing House, WANG Linjun, brought a book called “Symbols of Jiangsu” that presents a selection of 100 symbols of the Jiangsu province in order to demonstrate the cultural heritage generated by important historical figures, places and spiritual beliefs. Later, XU Li, Director of the Gulou District Library shared his own recent development – a unique book stamp that was distributed at literary events every year since 2018. The stamp would present the owner with three traditional Chinese works, including "First Intimate Contact" by Cai Zhiheng, "North Bound" by Xu Zechen, and "Silent Paris" by Shen Fuyu”. The Chairman of Jiangsu Chunyu Group, YAN Jun, expressed his excitement about attending the event and reconnecting with his years of youth through the medium of literature. Bringing the poetry selection “A Tour of Nanjing Guided by Classic Poems”, Mr. Yan was able to resonate with literature, other people’s lives and the city itself. NI Zhaoli, General Manager of Jiangsu Suiyuan Culture Development Co., Ltd., talked about the Suiyuan Recipes – a famous and honoured document in Chinese culinary field, often referred to as the Bible for Chefs. He mentioned the importance of such documents in embracing and learning more about Chinese culture, one of the examples being the numerous moon cake recipes that allow the unique process of tasting traditional Chinese delicacies. The Co-founder of the “Group Study Academy” Reading Club, LU Yuan, talked about the title of the City of Literature, well-deserved by the city of Nanjing. Mr. LU introduced a notebook containing the word “book edge” written by over 200 literary seniors in Nanjing, showcasing the city’s unique literary ancestry. Director of Programmes, Popular Bookstore, ZHANG Qianfei, mentioned the so-called “Book Walls” located in nearly 80 stores across the whole country that bear a similar symbolism as that of the notebook presented previously by Mr. Lu. LIU Lei, the General Manager of Nanjing Amity Printing Co., Ltd., presented the audience with an edition of Leo Tolstoy’s “War and Peace”. The colours of the Russian guards’ uniform in 1869 were the main inspiration for the binding and the printing processes for this edition. By making this statement, Mr. Liu emphasises the significance of book design which adds “artistry, personalisation and collection value” to the literary piece.