On July 2nd, 2020, ‘City of Literature Classics Collection Set’ was published by Nanjing Publishing & Media Group (Nanjing Press) with the Information Office of Nanjing City take the lead. Many literature celebrities came to the launching ceremony; they highly appreciated this collection set which demonstrates Nanjing’s cultural achievements from multiple perspectives. This collection set is not only a showcase of Nanjing’s culture but also a piece of classic works of Chinese culture. Famous writer Bi Feiyu said this collection set is the most suitable and resplendent response to the honor of ‘City of Literature’. At the launching ceremony

The first collection has made its first appearance with classic works of the authoritative version. At the ceremony, ‘City of Literature Classics Collection Set’ (collection one) has made its first appearance to the readers. The first collection includes 4 types of books: ‘Poetry Nanjing’, ‘Liweng on Rhyme, Occasional Notes with Leisure Motions’ ‘Essays of Suiyuan on Poetry’ ‘Memoir of Nanjing’.

Among all these books, ‘Memoir of Nanjing’ whose author is Xu Song from Tang Dynasty was edited and interpreted by professor Zhang Feng from Nanjing University History Department; ‘Liweng on Rhyme, Occasional Notes with Leisure Motions’ whose author is Li Yu from late Ming and early Qing Dynasties was composed and interpreted by professor Cheng Zhangcan and professor Ding Fan from Nanjing University School of Liberal Arts. ‘Essays of Suiyuan on Poetry’ whose author is Yuan Mei from Qing dynasty was composed and interpreted by professor Wang Yingzhi from Suzhou University School of Chinese Language and Literature. The editor of ‘Poetry Nanjing’ is Chen Yong, the minister of publicity department; this book is also the most authoritative version of Nanjing’s classic poetry. The book has included 343 selected works of 236 authors; this collection has reflected Nanjing’s profound literature background and achievements from multiple perspectives.

This collection will be published with four major contents in the future, and it will be shared to online.

The publication of this collection is a start. Lu Haiming, the president of Nanjing press, introduced, in the future, they would successively publish the 2nd and 3rd collection of “City of Literature Classics Collection Set”. 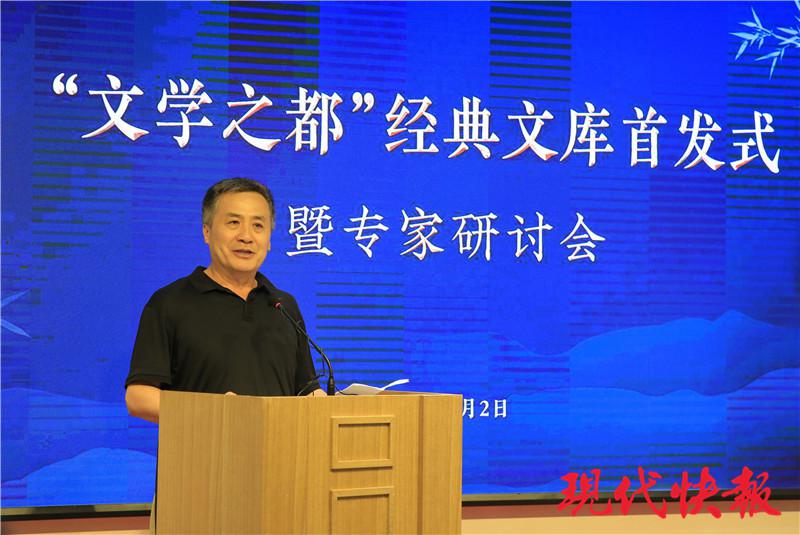 First, classics collection. The collection will mainly focus on finding and promoting traditional Chinese culture; all the selected works are classics throughout Chinese history. Each work has distinct ‘Nanjing elements’ since it is written by an author from Nanjing in Nanjing, and it’s about Nanjing.

Third, contemporary literature collection. It is a collection not only consider academic authority but also consider popularity rate to the public. The earliest publish date was on Oct 1st 1949, and no limit on latest publication date.

Fourth, youth literature collection. The collection will be completed with texts and graphics. The collection will tell teenagers stories of Nanjing with understandable texts. Nursery rhymes and idiom stories will be published shortly. ‘These four contents target different reader groups. They have established the ‘City of Literature’ publishing system from the perspective of the past, present and future; they have also provided the basic materials to the academic research of ‘Nanjing Studies’ said Lu Haiming. They will share these works online in the future.

Literature and history experts were all there. Bi Feiyu, Zhang Sheng, Hu Axiang and Cheng Zhangcan were supporting at the ceremony. 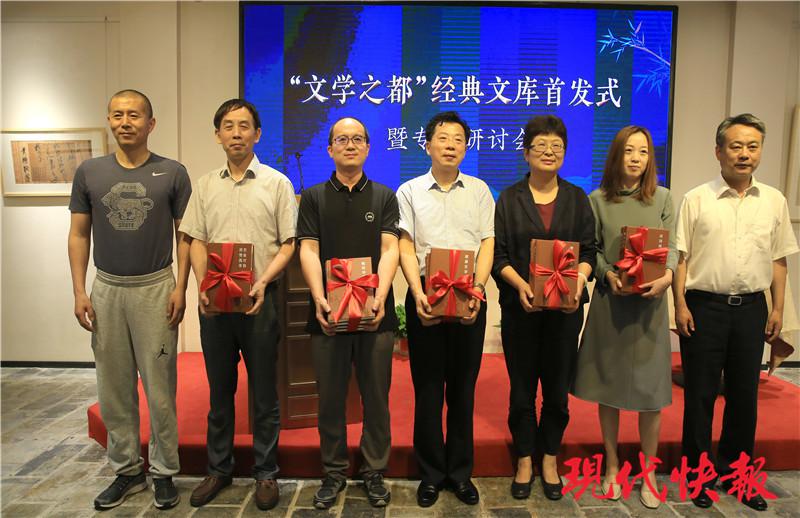 At the seminar, experts elaborated their points and spoke out freely. Famous writer Bi Feiyu thinks, most people have not realized the importance of ‘City of Literature’ as an honor. “If you ask me where does it come from? I would say, it walked toward us from Nanjing’s splendid literature history; it was lighted up from myriads of readers’ eyes; it was achieved from the hard efforts of Nanjing’s uncountable citizens and officers. People in Nanjing love literature and reading, and the entire China knows this, now the whole world knows this.” The head of School of History at Nanjing University thinks, we have inherited heritages from ancestors, and we did not let them down. We did not let them covered by the dust of time; with our hard work, we are digging out cultural and historical heritages. “The publication of ‘City of Literature Classics Collection Set’ is a periodic work.” ‘Memoir of Nanjing’ has twenty chapters, and it was written by Xu Song from the Tang Dynasty. ‘Memoir of Nanjing’ is a historical book that included the history of six dynasties which includes Wu, Jin, Song, Qi, Liang, Chen. The title of the book is from Nanjing’s history as the capital of six dynasties. The book not only provided reliable evidence to the field archaeology of the old capital relics but also played a vital role to research regarding Nanjing’s historical geography. This book is indeed an ancient version of ‘My Nanjing’.

For this time, professor Zhang Xuefeng, a famous Nanjing history expert from Nanjing University School of History, lead his team to rearrange the original texts of ‘Memoir of Nanjing’. This book has been selected into ‘City of Literature Classics Collection Set’. At Li Yu’s age of 40s, he and his entire family moved from Hangzhou to Nanjing; they lived in Nanjing for two decades ever after. Many of his works were accomplished in those two decades. It is worth mentioning that he had built the well-known Jiezi Garden at the southern part of Nanjing. Jiezi Garden was one of the literature and art activity centers in Nanjing. As an outstanding literature classic with a long history, Li Yu’s “Liweng on Rhyme, Occasional Notes with Leisure Motions” has contributed a lot to contemporary literature and cultural education. This book has multiple versions, according to experts in the past, the Langhuan Pavilion Press photocopy version in 1892 was the best one, and the newly published version was based on this as well.

“Essays of Suiyuan on Poetry” Yuan Mei’s poetry work “Essays of Suiyuan on Poetry” is the most influential poetry work in the Qing Dynasty. It has 16 official chapters, and ten lost chapters just got founded.

For this time, Nanjing Press has invited PHD tutor Wang YingZhi from Suzhou university to arrange this piece of work. Wang Yingzhi has been studying Yuan Mei for thirty years, and he has published many research papers regarding Yuan Mei. In this book, he will elaborate on the backgrounds of Yuan Mei’s poems and related poets from the Qing Dynasty. He has made notations and annotation to Yuan Mei’s poetry philosophy, and these can help readers to understand Yuan Mei’s spontaneous life easily. 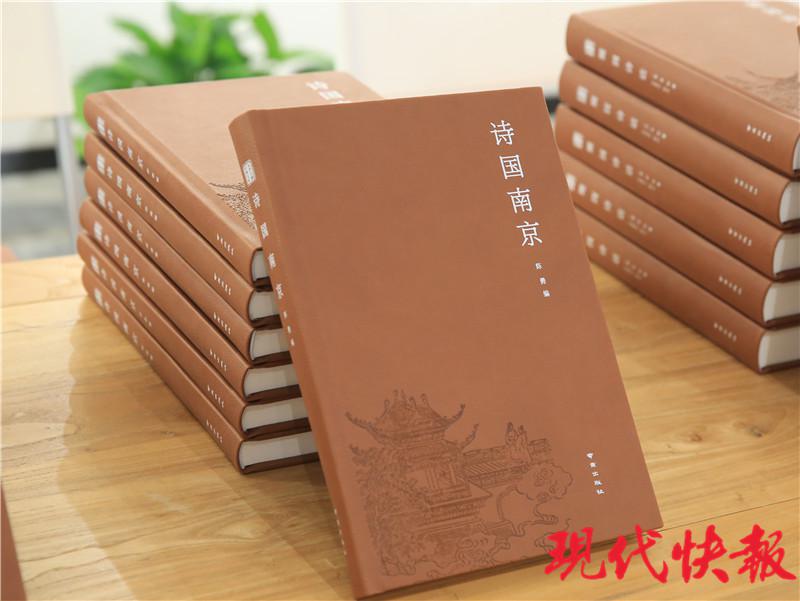 This book is one of the works from ‘City of Literature Classics Collection Set’; this book arranges literary works based on the time sequence of authors’ living periods. 343 poems created by 236 authors were composed before Oct 1st, 1949. The book not only includes classics from well-known authors but also included outstanding ‘lost-pearls’. This book has comprehensively reflected Nanjing’s beauty as a ‘poetry land’.